Somali Pirates on the Gulf of Aden
Pin It
Tweet 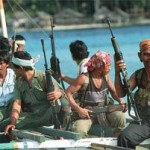 Bit of a different one today folks! I came across some interesting information about the Gulf of Aden, hardly a travel destination by any means but you better watch out if you’re taking a cruise or your boat past there!

You’re probably unaware that pirates still ride the seven seas today! Well, not your run of the mill, peg legged, rum swigging, one eyed, hat wearing scallywag, I’m talking about Somali pirates. These are the chaps that go around trying to board cargo ships forcefully with guns and usually end up in hour long firefights trying to gain access and steal a vessel.

The last decade had seen a rising trend in the number of ships stolen and attacks taking place but over the last 2 years it has been on the decline. The reason for the decline is that security measures have been stepped up onboard vessels and maritime security officers onboard the majority of these ships can send Samali pirates fleeing with their tails between their legs. This could be a visious circle though as with the stepped up security the pirate attacks are lessening.

2012 only 5 ships were captured compared to 2011 when 25 were taken and 27 in 2010. With less pirates attacking security may be stepped down, which could lead to more successful vessel thefts.

If your interested in joining the fight against Somali pirates, why not head to http://www.crossdeck.co.uk where you will be able to find training courses and access to jobs within maritime security.